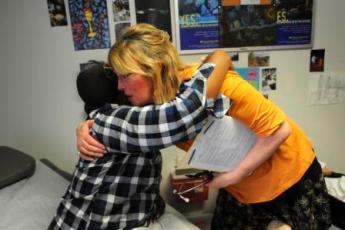 Bowers hugs Meite on Monday before Meite's reconstructive surgery. Bowers donates her skills and has an agreement with Trinidad's Mount San Rafael Hospital to use its facilities for $1,500 per patient.

Dr. Marci Bowers slipped into a chair in Exam Room 3, folded one long leg over another, looked at her patient — a young woman with wide eyes and a nervous smile — and got to the point.

"We want to help make your life better," Bowers said.

Mariama is as tiny as the 5-foot-10-inch Bowers is formidable, as soft-spoken as Bowers is confident. Mariama speaks softly and smiles easily, but a few hours with her make clear that her determination is as strong as it is quiet.

She is 26 and lives with her husband and daughter in Virginia, and didn't want her last name used. Originally, she is from Guinea, a country about the size of Oregon on Africa's western coast. Guinea has about 10 million residents, and about
96 percent of the women there have, like Mariama, been genitally mutilated.

Mariama and the six other women, all originally from Africa, crowding Dr. Bowers' tiny Trinidad clinic have traveled a long way to get that fixed. The women have come to this former coal-mining town in southern Colorado looking for more than just reconstructive surgery. They want relief from pain. They are looking for a chance, as one put it, to be normal. 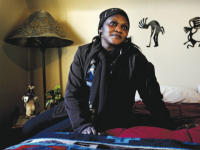 
"I want to be like everyone else," said Kady Meite, the only one of the women who agreed to have her full name used. "Now, I feel nothing. I feel pain" during sex, she said.

The World Health Organization estimates that 100 million to 140 million women worldwide, but especially in northern and central Africa, have endured female genital mutilation, or FGM.

Usually done to girls before age 15, the practice involves at least slicing off part or all of the exposed clitoris. In some cultures, the cutting is more extensive, and disfiguring. It's done occasionally by health care practitioners but most often by an older female relative. 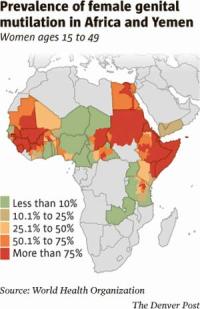 A lot of people inflict the damage. Bowers, whose clinic is known around the world as a destination for those seeking gender-changing surgery, is one of a few trained to surgically restore the clitoris, as well as repair other damage.

Since 2003 when she took over the work of Trinidad's pioneering sex-change surgeon, Dr. Stanley Biber, Bowers' practice has exploded to more than 200 of the surgeries a year, and there is a waiting list of patients. Bowers certainly didn't need more to do.

Nevertheless, she went to France a little over a year ago to learn a reconstructive technique developed by Dr. Pierre Foldes, which essentially cuts away scar tissue and surrounding skin to expose whatever is left of the clitoris.

In many cases the procedure also requires more extensive reconstruction.

The women gathered in her office last week are the second group Bowers has performed the reparative surgery for; both times she has donated her services.

Kady Meite, 43, originally from the Ivory Coast in West Africa, speaks with Dr. Marci Bowers before going through a female genital mutilation reversal surgery in Trinidad.

Because the procedure is new and rare, insurance seldom covers it. But Trinidad's Mount San Rafael Hospital has agreed to a flat rate of $1,500 per patient for use of one of its two operating rooms.

Like most of the women in Bowers' clinic, Meite had no idea repair was possible until she learned about Bowers on the Internet. "I said, 'Oh, my God. I don't believe it.' "

Meite is 43. She has been married 22 years and has four children. She would like, after all this time, for sex with her husband, Mustapha, not to hurt.

As Bowers made her way from exam room to exam room Monday, a theme began to emerge as each patient recounted her story: A young girl would visit some trusted female relative in a different town or a distant village. One day during that visit, she would be taken somewhere. Someone would hold her down, and a knife would appear.

"We went on a vacation to visit my aunt," Mariama said, describing her experience. "Then one day, she took me and her granddaughter — my cousin — to a different village. It was like there was going to be a party or a big ceremony. They were cooking food."

Mariama remembers being taken outside into the bush, where "a lady had a small knife." They forced her to the dirt. "I think they didn't want to get blood on a blanket."

She remembers being sliced three times. "The knife was not sharp enough. It hurt so much, I thought I was dying. I screamed so loud one lady physically was sitting on my face" to muffle the screams.

It took two months for the pain and bleeding to stop. In the meantime, the wound became infected, and Mariama got sick with a fever.

She was 8 years old.

When Mariama asked her mother why this happened, her mother explained that it was their culture.

The custom is most closely associated with Islam. Newsweek has reported that Dr. Foldes has received death threats as a result of his surgeries. Still, the women who have come to Trinidad don't believe they are doing anything contrary to the Muslim faith.

"There is nothing written in the Koran saying you need to do that," Meite said.

Growing up in Guinea and the Ivory Coast, Mariama and Meite watched girls who were not cut be ostracized, whispered about, called "unclean."

It wasn't until she came to the United States, as the bride of a Guinea-born chemist, that she learned that in many places what happened to her was not acceptable, or even legal.

The first time she was examined by a doctor in the U.S. — who had never heard of FGM — "his face was like he had seen a ghost," Mariama said.

When she gave birth to their daughter, it had to be by cesarean section; nurses couldn't even insert a catheter, she said.

Her daughter, now 5, has never been to Guinea, and she never will, Mariama said.

"I refuse to go back. I won't let them near my daughter."

A path toward healing

After they met with Bowers and filled out paperwork at the hospital, the women went to their rooms at the Morning After Guest House.

Typically, the Morning After is a haven for those who have come to Trinidad for sex-change surgery. But this week, it had been reserved for the women.

The night before the surgeries, that guest house was a bustling, noisy place. The television on, the radio was blaring, exotic smells wafted from the kitchen as owner Carol Cometto threw a dinner for them.

The women come as a group for pragmatic reasons — Bowers blocks out time for surgery, the guest house is reserved.

But there is another less tangible benefit to the mass scheduling. As the evening proceeded, the women got acquainted, and for many, it was the first time they met others who faced the same traumas and made the same decision to seek healing.

Eventually, a woman in a plaid schoolgirl miniskirt, fishnet stockings, boots and a fur-trimmed white jacket walked in, carrying a large box of vibrators.

"Tonight I get to play Santa Claus," Nadine Gary said.

Gary is with the organization Clitoraid, which she describes as working toward twin goals of "ending FGM worldwide and to help as many victims as possible through surgery."

To fully help them, Gary believes, means more than just ending the women's pain. It also means beginning their pleasure.

Female genitalia is "just like any part of body that has been cut," Gary said. "You need physical therapy so it starts to work again. The nerve paths need to be reactivated so they reach the brain."

If that notion was a bit much for a group of women whose childhood lessons taught that sex may be enjoyable for men but a source of pain for women, they didn't say anything.

Early Tuesday morning, while darkness still clung to Trinidad, a car pulled up outside the guest house, for the first of four trips that day to the hillside hospital.

The surgeries took little more than an hour each, and by 3 p.m. four women were back at the guest house, sore and resting.

Wednesday, the process was repeated with the remaining three.

Bowers had prepared them for some post-op pain, but that didn't deter them.

Meite, who said she has converted to Christianity, believes "God has a purpose for everything." Now, she said, she has found the answer to why this happened to her.

"Now, I have found someone who can help me, and so I can help a lot of other women."