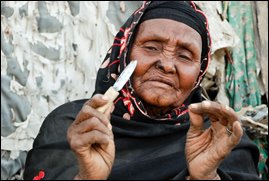 Clitoraid applauds an anonymous and former female genital circumciser in the small town of Odienné, Ivory Coast, who decided to give up on the practice of excision on young girls. An article published in Abidjan.net explained how she became aware that all the women she had excised before suffered from the same pain as her own. She said that this pain has negatively impacted her couple’s relationship for years because she never felt any sexual desire for her husband. Clitoraid praises this former female genital circumciser for her decision and is offering her and all former female genital cutters to have their clitoris restored through restorative surgery in order to regain their sense of pleasure.

Banemanie, Clitoraid’s representative in French-speaking Africa, explains: “Through ignorance, atrocious acts are committed and then we feel guilty. Former female genital cutters will be rehabilitated in their sexual function and this will erase centuries of traditions of female suffering. This symbolic gesture puts an end to a barbaric tradition and represents the beginning of the emancipation of women.”

Clitoraid will officially open the doors of the Pleasure Hospital in Bobo-Dioulasso, Burkina Faso, this October, thanks to a team of doctors trained to give the sense of pleasure back to excised women. A French surgeon, who trained Clitoraid’s volunteer surgeon, Dr. Bowers, perfected this surgical operation. The mission of the Pleasure Hospital is to offer the clitoris restorative surgery to all excised women free of charge.

Dr. Bowers, OBGYN in California, specialist surgeon for Transgender people and Dr. Henning, OBGYN in New York, have already successfully carried out several surgical restorations on African women who have immigrated to the United States.

Clitoraid is a non-profit and private organization founded following the idea of spiritual leader Maitreya Rael, who is a fierce human rights advocate.